Genoscope – Filling the gaps in the banana’s genome

The field of genomics recently achieved a major breakthrough in its mission of filling in the gaps in DNA sequencing. The first steps toward that goal were made in 2019 with the Telomere-to-Telomere (T2T) Consortium, a community of researchers seeking to assemble the first unbroken sequences of human chromosomes. Starting with the X chromosome, the consortium’s objective is to sequence each chromosome, from one extremity (the “telomere”) to the other, with no breaks in the information. Their tool of choice is an Oxford Nanopore technology able to read very long sequences of up to a million bases.

Recently, researchers from the French national sequencing center Genoscope teamed with colleagues from the French agricultural research and international cooperation organization CIRAD to deploy the Oxford Nanopore PromethION sequencer in a project focused on the chromosomes of Musa acuminata, a species of banana. 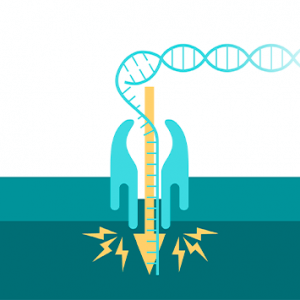 The Oxford Nanopore technology involves forcing the passage of a DNA fragment through a nanometer-wide pore carrying an electrical current, which is modified in a specific manner by the passage of each base (adenine (A), cytosine (C), guanine (G) or thymine (T)). Via the measurement of those current modifications, the technology progressively identifies the DNA sequence. In their novel project, the Genoscope-CIRAD team used that technology to successfully sequence five of the banana’s eleven chromosomes entirely, from telomere to telomere, with no regions left undetermined. The team’s achievement was published in Communications Biology in September 2021.

The importance of this work is to be found in the banana’s nutritional importance across the globe and its economic importance for many countries. Particularly, this sequencing study revealed much greater complexity than was previously thought in a region of the genome involved in pathogen recognition. For this crop plant susceptible to several diseases such as black sigatoka and fusarium wilt, the results of the Genoscope-CIRAD study could lead to the discovery of disease-resistance genes.

Shining light on a key mechanism of Duchenne muscular dystrophy 

A Genethon team has provided new insights on a complex genetic mechanism involved in mitochondrial dysfunction in Duchenne muscular dystrophy.

A trio of genome sites associated with arterial hypertension 

Researchers from the CNRGH and PARCC have identified three loci associated with an increased risk of developing primary hyperaldosteronism, a leading cause of arterial hypertension.

The story of the domestic donkey told by its genome

Genoscope participated in the sequencing of the DNA of 250 donkeys in a study revealing the domestication of this species highly contributive to human activities to this day.

Conceived by the Genomics Metabolics Unit, Galaxy-SynBioCAD accelerates biological design and engineering for the production of next generation chemical compounds.

The Genopole team SysFate is participating in the international project T-FITNESS. The project, selected by the European Innovation Council, aims to resolve the difficulty of T-cell exhaustion in CAR-T therapies for solid tumors.

Toward the genomic selection of farmed insects 

France is historically a land of livestock farming. Cows for meat or milk, sheep, pigs, fowl of all sorts; France rears them all. And insects! With its genomic selection project for Tenebrio molitor beetles, the Genopole company Ÿnsect and its biocluster partner, the sequencing center Genoscope, are making France a pioneer in insect farming.

A feat in the study of planktonic life 

A Genoscope research team was part of a pioneering study in environmental genomics. The researchers were able to at least partially reconstitute the genomes of close to 700 eukaryote species.

The I-Stem and Genethon laboratories have identified a promising drug combination in the setting of three genetic diseases sharing similar molecular mechanisms.

An artificial intelligence to diagnose and explain 

The IBISC laboratory has conceived an architecturally-innovative neural network able to provide not only a diagnostic prediction but also a biological explanation.

News from the human genome 

The 1 April edition of Science announced the publication of the human genome with the previously-missing 8% now added to it. Comments from the Genopole Director of Research.

Consequences of phthalate exposure during pregnancy 

Jörg Tost and his team of the National Center of Human Genomics Research (CNRGH; CEA) were part of a large collaborative study aimed at determining the genome-wide correlation between phthalate exposure during pregnancy and methylation of placental DNA.

A gene therapy conceived by Genethon has been shown to confer long-term efficacy against Wiskott-Aldrich syndrome, an immune deficiency disorder.

A cellular model to recreate the human muscle-nerve system

Researchers from I-Stem, IPSEN and LMN have conceived a cellular muscle-nerve model to test the therapeutic potential of botulinum toxins in vitro.

Sysfate at Genoscope has combined image analysis and genomics to create MULTILAYER, a tool to digitize biological tissues and organs.

A gene therapy for Charcot-Marie-Tooth disease has been shown to be efficacious in an animal-model study cosigned by a research team created through Genopole support.

Its French affiliate arrived at Genopole in 2011 and to mark its 10th anniversary in France, the company invites you to participate in monthly activities to be held throughout 2021.

Seeing in high resolution at the Structural Biology Platform

With the support of Genopole & the University of Évry and to enrich its technological offer, the Structural Biology Platform has acquired the Opera Phenix Plus high content screening (HCS) system.

Discover
View all >
With the support from